Most birthing people would prefer to avoid a cesarean unless absolutely necessary. And yet many, many end up having C-sections that are not medically necessary.

One of the ways we know this is that “primary C-section rates” vary dramatically from hospital to hospital, even where outcomes do not.

What is a “primary C-Section” rate?

The primary C-section rate for an individual hospital looks only at the population of births at that hospital in the reporting year to people who had not had a prior C-section.

For the data we use in this article, the rate is defined as:

the total number of low-risk* people in that population, including both those who ended up giving birth vaginally and those who had a first-time C-section.

*”Low risk” is defined by the Agency for Health Care Research and Quality (AHRQ) and means birthing people who are at term, with only one baby, who is presenting normally, and no fetal death.

[Note: If this is your first baby, or if all your prior births were vaginal births, then the primary C-section rate is the rate you care about. If you’ve had a C-section in the past, then you should look at hospital VBAC rates instead.]

Here in the Chicago-area, primary C-section rates at individual hospitals range from 6.7% to 23.8%, but higher rates are not generally associated with better outcomes. This means that too many birthing people are suffering the discomforts and risks of a major surgery that didn’t actually benefit them or their baby.

The good news here is that you can dramatically reduce the likelihood that you’ll have a cesarean simply by making a thoughtful choice about where to have your baby.

Whether you will have a C-section with this pregnancy depends largely on where you give birth.

The best way to understand why C-section rates are so important is to look at the data.

At these 6 hospitals, 4012 low-risk people gave birth who had not had a prior C-section, and 381 of those ended up giving birth by cesarean. That’s an overall rate of 9.5%.

At these 6 hospitals,  4635 low-risk people gave birth who had not had a prior C-section, and 1025 of those ended up giving birth by cesarean. That’s an overall rate of 22.1%.  (Note that these are risk-adjusted rates, which means that the differences cannot be explained away by risk factors in the populations served by each hospital.) 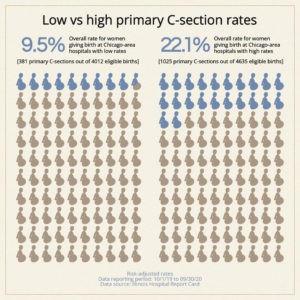 That means that 57% or well over half of the primary C-sections at hospitals with high rates could have been avoided if those birthing people had instead given birth at one of the hospitals with low rates. 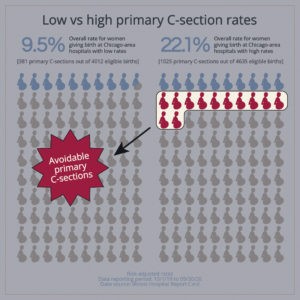 Those percentages represent real individuals whose C-section was caused by their choice of hospital.

Imagine if all the 4635 birthing people who gave birth at hospitals with the highest rates had instead given birth at hospitals with the lowest rates. Only about 9.5% of them — or 440 people — would have had C-sections. That’s 585 fewer C-sections (1025 – 440 = 585), which means that nearly 600 Chicago-area birthing people could have avoided their cesarean section simply by choosing a hospital with one of the lowest primary C-section rate instead of a hospital with one of the highest rates.

You can see the primary cesarean rate for any Chicago-area hospital by searching in the Home Birth, Birth Centers and Hospitals Directory.

C-section rates are generally lower for those who choose midwife care in a hospital. Rates are lowest of all for those who choose to give birth at home or at a freestanding birth center. Learn more about your options for midwife-attended and out-of-hospital birth below.

Which hospitals have the  lowest c-section rates in the Chicago-area?

According to the most recent data reported by the Illinois Department of Public Health, the lowest cesarean rates for Chicago-area hospitals are: 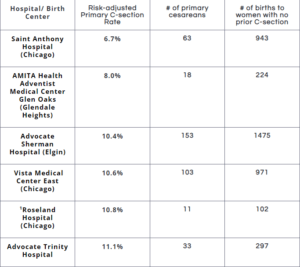 Some hospitals provide data on their midwife practices’ outcomes, including primary C-section rates.

Midwives do not perform C-sections, so these cesarean rates reflect the number of mothers who began labor in the care of the midwives and ended up having a C-section performed by a surgeon. These rates are not risk-adjusted, and should not be directly compared to the overall rates for Chicago-area hospitals reported above. But if you qualify for care and begin your labor with one of these hospital-based midwife practices, the likelihood that you will have a cesarean birth is as low as at the hospitals with the lowest rates.

The following hospital midwifery practices have rates that are comparably low to the lowest overall hospital rates reported above:

Here in the Chicago-area, birthing people who plan to give birth at home or in a freestanding birth center like The Birth Center at PCC have a 3 – 4% chance of ending up with a cesarean. That’s two to four times lower than the lowest hospital rates (which range from about 7% to 11%), and six to eight times lower than the highest hospital rates (which range from about 19% to 24%).

Of course, those who qualify to give birth in these out-of-hospital settings are very low-risk to begin with, so they are less likely to need a c-section wherever they give birth. And since these out-of-hospital rates are self-reported and not risk-adjusted, they cannot be compared directly to the primary cesarean rates at hospitals.

Still, if you qualify to give birth at home or at a  freestanding birth center, these rates do give you a fair picture of how very low your cesarean risk could be.  If avoiding a C-section is a top priority for you, these could be good options to consider.

BirthGuide offers lots of information to help you decide. You can take the “where should I have my baby?” questionnaire to see if home birth or a birth center might right for you. You can also hear birth stories, learn more about the pros and cons of each setting, compare home birth and birth centers to hospital birth, and find home birth midwives and birth centers. [Note: This content is not currently available in gender-neutral language versions.]

The following hospitals have primary C-section rates that are better (lower) than the average for hospitals in our area: 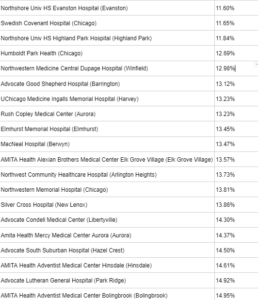